“Ordinary fucking people.” It’s a line from Repo Man. It came up in an episode of Party Down I was re-watching the other night. Roman (played by the underrated Martin Starr) quotes it in one of his many moments of frustration with people and what he sees as the superficial lives they lead.

What is wrong with me?

I sure am tired of asking myself that question. I am exhausted by comparing myself to other people and whatever standard I think they’re holding up. Why do I think there’s something wrong with me? The answer, of course, is a nearly limitless list of the world’s  expectations that I don’t meet, the messages I’ve been getting for my entire life, the ways people I know do meet those expectations, blah blah blah. And there are things I want to change about myself. I am down with improving as a person. Ever evolving and learning.

BUT. There’s nothing wrong with me. I’m not broken because I prefer to stay up late and sleep in. I’m not a disaster of a person because I feel things deeply and hate cooking and am messy as fuck (and funny as hell and loving as crap) and never satisfied or certain, and also boring as shit sometimes. I am not broken because of my mental illness. It makes life difficult and painful, but without it I wouldn’t have many of the gifts I have. It is both my Achilles heel and my super power. So while I am always working to improve myself, I am working even harder to accept myself.

It’s a bit of a tight rope walk.

Have you seen the movie Man on a Wire (see photo below)? That’s what I imagine. Me, on a wire between the once soaring World Trade Center towers, with only a pole (I guess in this metaphor the pole in my life would be a combination of meds, pop culture and loved ones) to maintain my balance. It’s dangerous up here. While Philippe Petit,* the man who actually achieved this feat, could have fallen to the pavement, I have two falling options. On one side of the wire there is a dark abyss of despair and loneliness, on the other a steaming vat of uniformity. I don’t want to fall, but frankly, if falling were inevitable, I would try to lean my pole toward the dark abyss (I said “my pole.” This is not the time for a dick joke! Just kidding, it’s always the time for a dick joke). 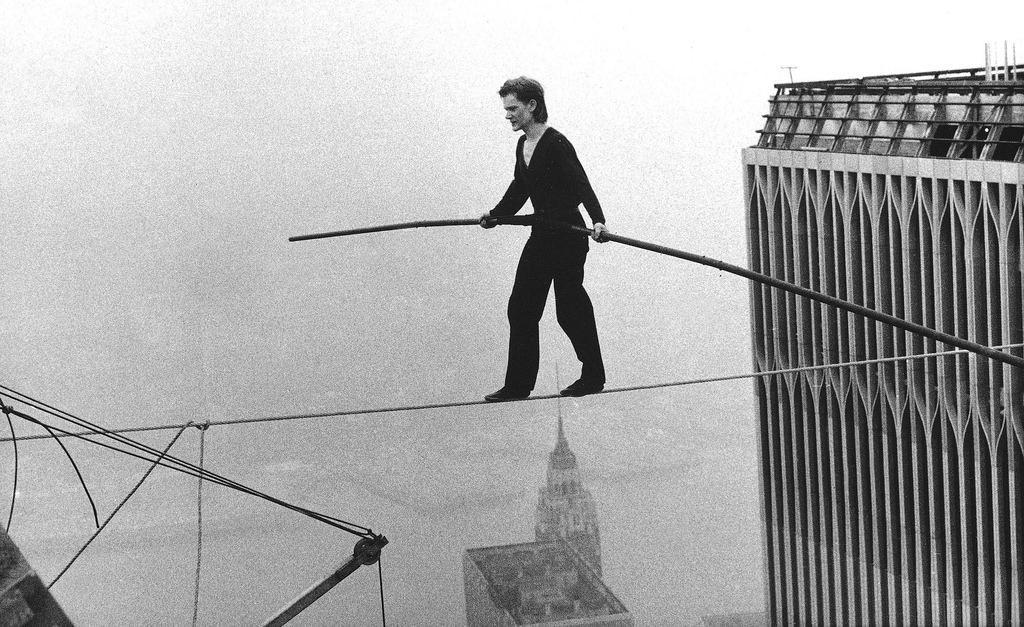 I just want more than other people’s narrow definitions of what I’m supposed to be. I want more than the pursuit of “happiness.” I want the struggle that comes with evolving. I don’t want to be ordinary fucking people.

*Don’t misunderstand me, I am not nearly as brave or interesting as Philippe Petit. I am far more ordinary than he.