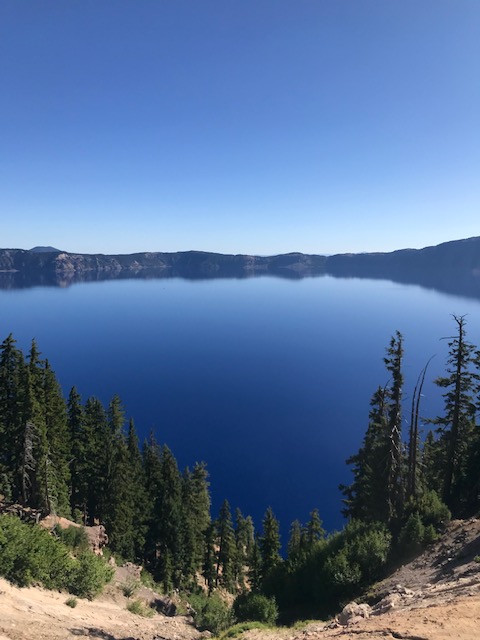 Crater Lake is one of the most spectacularly beautiful things I’ve ever seen. It’s a striking, bright royal blue, a shade I’ve never before seen in the natural world. The lake is magical. It draws you. Like a fountain of youth but something much more humble.

What Crater Lake offers is a chance, I think. A chance to breathe. A chance to be grateful for something outside of ourselves. It is a gift and I was awed and of course humbled by it. This, being awed and humbled by nature, is my own version of spirituality.

I’ve been thinking a lot about the forming of Crater Lake. As the informational video in the visitor’s center will tell you, Crater Lake was born out of violence. 7,700 years ago Mount Mazama, once over 12,000 feet tall, erupted with such force that the mighty mountain collapsed in on itself, forming a giant caldera (which is slightly different than a crater but I’m not a goddamn scientist so I don’t know the difference). Then, centuries of snowfall and rain filled the caldera and it became what we now know as Crater Lake, a piece of such raw beauty that the term “breathtaking” is not an exaggeration.

As for the first people who lived on the land near the lake, the Klamath tribe, they have their own story about how Crater Lake was formed. To honor the Klamath people, I want to share their story: 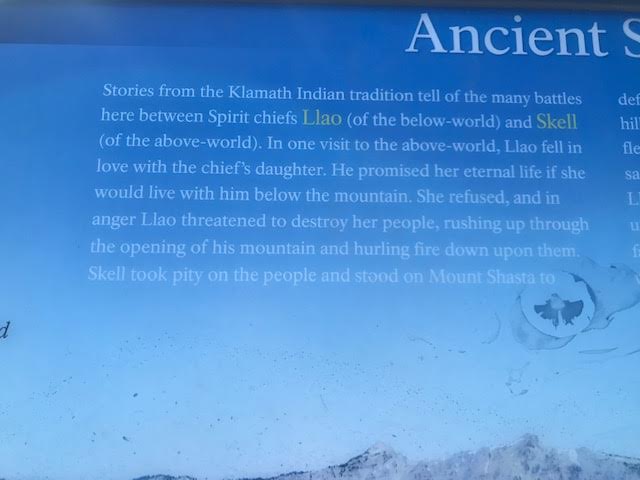 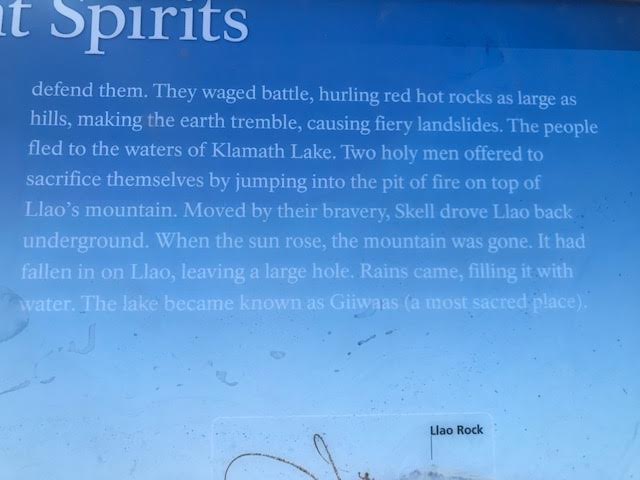 The above photos are bad photos I took at one of the lookout points on the scenic drive around the lake. I hope they’re readable. If not and you want to know what they say, please let me know.

Giiwaas: a most sacred place.

Crater Lake has remained untouched by pollution of any kind, making the brilliant blue water some of the purest in the world. In the awful human world we live in this seems impossible. Fantastical even. But it also represents what is possible when humans leave something beautiful alone.

Because I’m always thinking in metaphors, I can’t help thinking about Crater Lake’s violent past and current state of serene beauty when I think about our family. We are nowhere near serene beauty: We are in a state of struggle. Mount Mazama sacrificed everything. That mountain took a chance on eruption because the way things were was not sustainable. There was too much pressure building. In this way, I empathize and relate to Mount Mazama. I see some of ourselves in her long and difficult road to change.

I do know that mountains don’t make decisions (or do they?), so don’t worry about my intelligence. But the mountain and its sacrifice moved me. We are but a small group of humans and contain none of the majesty or wisdom of the mountain or the lake (but we do contain some explosiveness). We also took a chance and threw our lives into a kind of violent chaos. I am so hopeful that we too will be left with something beautiful.